A world renowned dish, the Nawab of the Dishes is the Biryani. The aroma of the Basmati rice, steamed with authentic Indian spices, chunky pieces of Ghosht, Murgh, Fish or Soya is like Rambha of the culinary world. Initially introduced by the Hyderabadi Nizams, its taste was said to be so divine that it was presented as a reward to the soldiers, to those who would fight, win and were lucky enough to witness another sunset. Each city has its own way of trademarking its Biryani, mostly varying on the method of cooking, that being the Pukka style and the Kutchi style. While in the pukka method layers of meat and rice are cooked together, in the kutchi style they are cooked separately and then later mixed together.Whatever said and done, this King of food does a great job of satisfying its subjects and is therefore known for its prosperity. Hence, the battle still rages on, not on physical grounds but as to which Indian city plays host to the most luxurious Biriyani. 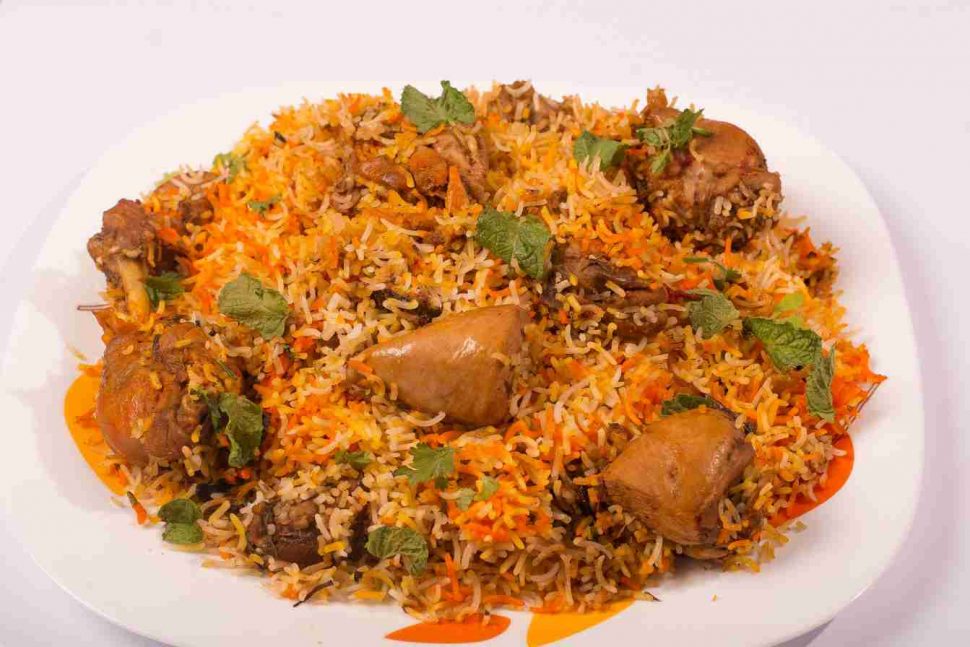 The bustling city, the land of pearls, Hyderabad, home to the Iconic Charminar, the heart burning Gongura chutney, is also credited with the greatest invention in the world in the field of culinary sciences, the one invention, that brought souls to their knees, and still does, and will do for generations to come, the sumptuous Chicken Biriyani.

Primarily a Muslim dish, its essence has lured people from every aspect of the social structure, breaking barriers, and developing a bond that is as firm as an anchor to the ground. Once the proud capital of Awadh, then one that of the Delhi Sultanate, later the British Empire and now, the quaint capital of the state of Uttar Pradesh. A quaint city, once ruled by both the Hindu and the Muslim rulers, its mix of influence is magnificent to experience. The structures that stand today amidst the roaring metropolitan, is a great reminder of the wonders of history, long forgotten. One does not simply tour the city and browse around for fabrics, poetry, and utensils without having to taste its magnificent Awadhi cuisine, the all time favorite being, Lucknowi Dum Biriyani.

Its recipe has been passed down to the family’s heir, from generations. Its pride is in its method of cooking and its satisfaction lies in witnessing the happiness of the public.
Cooked by the Kachchi style, the mutton/chicken is sauteed with wholesome Ghee (clarified butter) and Indian spices until cooked. The meat is then layered with cooked rice, one on top of the other, and cooked together, with a covering enclosing the vessel. This is known as the Dum Biriyani.

Kolkata is a city which is a true example of the saying Unity in diversity, for one can find just any kind of person, food, culture, language or art here. The land of chivalry, we end our pilgrimage at this last site.

The throne and pride of the erstwhile British Empire, Kolkata is a city, that one is, for sure, not to miss. The food, influenced by various cultures, such as the Chinese, Mughlai, Bengali, Hindu, Islamic, Western and so on, is the pride of this cosmopolitan city. It’s filled with the memoirs of old poetry, the scent of freedom in the air, and the ambience of pure joy and acceptance. Wallowing in the happiness that the city provides, one is tempted to try the local cuisine, in this case, yes – you guesses it, the Calcutta Biriyani.

The Calcutta Biriyani, fills our stomach to our heart’s content. Surprisingly, the specialty of the Calcutta Biriyani is its simplicity. There is no special ingredients, no special method that it has to follow. The joy of eating a bowl full of biriyani, on a cold evening, gazing into the sunset of kolkata, reminiscing in the beautiful poems by Tagore, is one that is positively hard to beat, and the feeling of absolute content of gushing down that hot plate of biriyani with a Roshgulla is an experience that one can never miss.

Travel to these historic cities, experience their culture and cuisine, and let us know which according to you is the best city to have a hot, steaming plate of sumptuous Biryani.