Trapped in war - captive animals suffer too. They belong in the wild


Zoo animals are trapped by design. They are either taken or bred in an environment that’s not their natural habitat, and forced into enclosures so that they can’t escape, for the benefit of paying visitors. This leads to tragedy when their enclosures are no longer in a safe place and the income dries up as we have seen in in Ukraine The war in Ukraine is heart-breaking - countless innocent lives are being lost every day, and 4.3 million people have fled the country. We are devastated by the humanitarian tragedy unfolding and are deeply disturbed by the immense suffering this is causing for animals.

Animals are often the forgotten victims of conflicts and wars.

In particular, zoo animals in Ukraine have found themselves trapped in the middle of a terrifying conflict through no fault of their own. This has led to the prospect of some zoos stating that they will have to euthanize many of their animals, which has led to a despairing outcry, and rightly so.

Zoo animals are trapped by design. They are either taken or bred in an environment that’s not their natural habitat and forced into enclosures so that they can’t escape, for the benefit of paying visitors. This leads to tragedy when their enclosures are no longer in a safe place and the income dries up as we have seen in Ukraine. 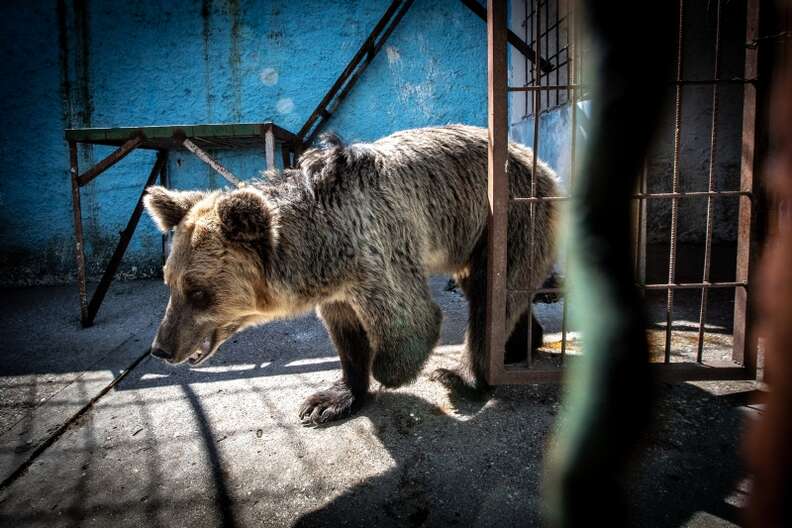 The Geneva Conventions highlight humanitarian rights during the war – yet animals’ rights aren’t considered, and places such as zoos - set up for entertainment purposes, often become battlegrounds in conflicts. The animals are captive and unable to flee – yet are subject to regular attacks. We strongly believe that both civilians and animals deserve protection.

As a result of attacks, many animals have been killed, or the zoo enclosures have been partly destroyed. This presents immense dangers to both animals and people if they escape - especially in urban areas. The loud noises and sights of war also lead animals to become traumatized and stressed. This has been seen at Kyiv Zoo, where animals are being given sedatives, and in some cases, moved underground where their keepers stay with them for comfort.

But this situation isn’t unique, and it’s not just challenging during wars. We recently saw a similar situation with the covid pandemic. Thailand was hit hard by the crisis when international tourism dried up, and attractions were left empty. Tourism camps housing captive elephants were shut down, and thousands of staff were laid off. The country’s 2,000-plus captive elephant population was left in a precarious situation where owners were struggling to provide them with the basics such as food and medical care.

When animals are taken out of their natural environment, it makes them dependent on humans. Placing complex, intelligent and endangered wild animals, in captivity is not only cruel, but it also leaves them at the mercy of external crises like economic downturns, pandemics, or war.

In Thailand, we were able to step in and help, as we have done in the past. We provided emergency help for numerous elephants in their time of need. But with war, this is sadly a lot more complex.

Firstly, there are supply issues and shortages of food and medicines in war-struck regions. Carnivores in particular such as big cats need huge amounts of meat which is not only expensive but difficult to obtain.

Secondly, reaching the premises can be logistically challenging. Above all – it’s hazardous and made worse by the fact that safe corridors have not been made a guarantee. Loading already stressed animals into crates to be transported through chaotic conflict zones can cause severe illness or even death, not to mention the threat of being hit by military strikes. There are also specialist transport needs, such as mobile cages to consider. We are currently seeing zoos, directly in the firing lines, being subjected to shelling. Sending people in to provide supplies or even rescue animals, puts their lives at risk too.

Thirdly – finding safe places for so many animals is a challenge when the zoos are responsible for hundreds of animals. Mykolaiv Zoo alone, for example, positioned in an area of fighting, has 4,000 wild animals, from 200 different species. Wild animals have complex needs and will need life-long care. This is no small feat – it’s an expensive commitment.

These are just a small handful of factors to consider and are by no means an exhaustive list.

We recently helped fund a rescue of a former circus bear called Masha from Ukraine, who was taken to our partner sanctuary in Romania, AMP, following a life of cruelty. It was a herculean effort to evacuate her, but she made it to the sanctuary and it was a joyous thing to see her enjoying her newly found freedom. Tragically, her well-deserved retirement was cut short as she suffered a stroke, just three weeks after arriving. This could well be due to her old age or poor health - but we can’t rule out the stress of undertaking such a long, perilous journey. We are only grateful that in her final weeks she had the best care – Masha passed away surrounded by nature as if it were the wild. Behind the scenes, we are exploring options to help rescue other animals too – but there is no easy quick-fix in the middle of such a volatile situation, and the sad story of Masha shows that moving animals presents potential challenges.

We are all hoping for the best possible outcome for the wild animals in zoos and aquariums. It is an extremely sad situation that serves as another reminder of why wild animals, should be protected and kept in the wild. A gradual phase out of keeping captive wild animals for commercial exploitation would prevent such tragic situations from arising in the future.

Ukraine illustrates the peril we cause to wild animals when placing them in captivity and leaving them vulnerable to human-caused activity and tragedy. It is vital we have a future where wild animals are living a wild life, thriving in their natural habitat, not subject to life in captivity.